Despite only being nine months into his presidency, America is not impressed with how things are going.  The biggest issue, which could really hurt democrats, is that independents are turning on Biden.  They seem to be seeing the incompetence and chaos.

An NBC News poll out on October 31 finds 54% of Americans disapprove of Biden’s performance.  The same survey had Biden with a favorable / unfavorable rating of 40% / 48%, almost identical to Trump in the same survey.

The same NBC News poll has 70% of independents and 48% of Democrats believing the nation is headed in the wrong direction.  This is not good for Biden.  But it gets worse, only 18% strongly approve of Biden while 46% strongly disapprove.

As the President talks more and more about compromise and meeting in the middle, it seems he is only trying to compromise with the diehard loyalists, ignoring the majority of voters.

On Sunday, White House press secretary Jen Psaki announced that she has tested positive for COVID-19 despite being vaccinated.  She did not travel with Biden due to a family emergency, which was household members testing positive for COVID-19.  She says that she has been quarantining since Wednesday and has not had close contact with the President or Senior White House staff since then.  Shockingly, she is disclosing this out of an abundance of transparency, which you must have just learned about.  Psaki said her symptoms are mild thanks to the vaccine.

She added that she had not seen the President since Tuesday, when they were sitting outside, six feet apart, wearing masks.  That was a day after Biden coughed into his hand following a speech in New Jersey and proceeded to shake hands with the public without a mask.

All this is happening less than two weeks since Homeland Security Secretary Alejando Mayorkas test positive for COVID-19 just days after an event with the President, just feet apart with no masks.

Psaki also brushed off questions about the Biden’s walking through a high-end Georgetown restaurant without masks, violating D.C.’s indoor mask mandate.  She added that people should focus on his policies, not moments in time. 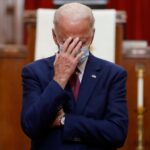 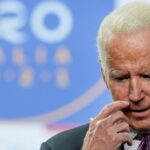 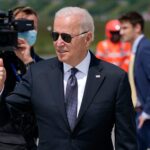 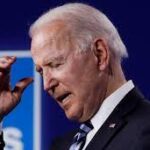 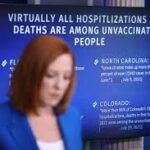