He was convicted in November of lying to Congress and witness tampering.

Roger Stone, the longtime friend and former campaign adviser to President Donald Trump, is being sentenced Thursday morning at federal court in Washington amid speculation that Trump could pardon him depending on what happens.

His fate took on new significance last week when the career prosecutors who handled the case recommended a sentence of seven to nine years for Stone, who was convicted of lying to Congress and witness tampering in November. After Trump tweeted that recommendation was a “miscarriage of justice,” Attorney General William Barr overruled the prosecutors and the Justice Department submitted a new recommendation calling on Judge Amy Berman Jackson to give Stone a much lighter sentence. Shortly after, in an exclusive interview with ABC News Chief Justice Correspondent Pierre Thomas, Barr warned Trump to stop tweeting and commenting on the case, saying he was making it “impossible” to do his job.

Sources have told ABC News that Barr, who has called the Stone prosecution “righteous,” is seriously considering resigning. Stone, 67, was convicted of misleading congressional investigators on several key elements of their probe into Russian meddling in the 2016 election, including communications he had with the Trump campaign about the WikiLeaks dissemination of damaging documents stolen from Democrats during the campaign. 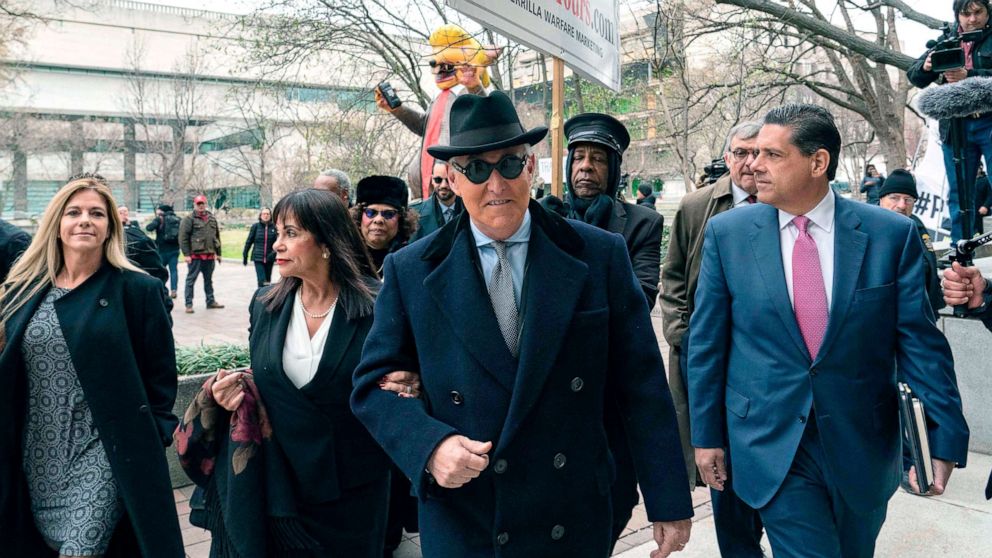 ABC News has a team of reporters and producers inside and outside the courthouse.

Here is how the story is unfolding. Please refresh for updates.

11:23 a.m. Judge takes break in proceedings; Stone says he won’t speak on his own behalf

“At this point I want to take a short break,” Judge Jackson says.

It is not clear whether she will announce the sentence immediately upon reconvening.

After his defense counsel concluded an impassioned plea for a sentence with no incarceration, Roger Stone rises to say he chooses not to speak on his own behalf.