At CPAC this weekend, Jerry Falwell Jr., the Liberty University president and son of famed evangelist Jerry Falwell, hosted a panel that included the likes of Donald Trump Jr. and Turning Point USA founder Charlie Kirk, so naturally the conversation turned towards the freshman Democratic congresswoman Alexandria Ocasio-Cortez, her Green New Deal, and “all these new socialists in the Democratic party.”

During the discussion, the subject turned to the left’s alleged lack of respect for gender norms, with Falwell’s wife chiming in.

“Three weeks ago tomorrow we had our second granddaughter, and her name is Reagan, how presidential is that?” Becki Falwell said, before Trump Jr. interrupted.

“I lobbied for ‘Trump’ but it was a little too soon maybe, but we’ll see,” Trump joked.

“Trump is not the most feminine name,” Mrs. Falwell replied.

“Hey, were going to take a page out of the liberal playbook, it doesn’t matter,” Trump joked back, apparently referring to the topic of gender norms. “We can identify how we want.”

The Bishop’s tweet is corrected for context here. Still wondering what the standards are for what merits a resolution and what doesn’t. https://twitter.com/parkermolloy/status/1102991021762404354?s=21 …

Here’s @JerryFalwellJr threatening to shoot @AOC at @CPAC this past weekend. pic.twitter.com/elYyijYGfD 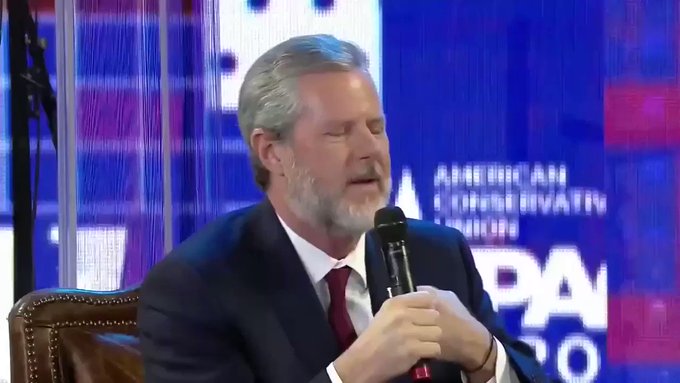 2,211 people are talking about this

“God makes the choice what the babies are gonna be, and God decided she would be a girl,” she continued.

“You don’t to raise ’em to be a girl,” Falwell Jr. interjected. “She’s got a little baby doll right under her arm every second.”

“My boys always had guns in their hands,” he added. “That not something you teach them. That’s something they’re born with.”

As he went on, the subject of AOC’s Green New Deal and guns was too hard to resist. Turning to DT Jr, Falwell brought up the Green New Deal’s alleged plan to eliminate the mass production of cattle.

“As far as those cows you mentioned, I’ve got a hundred cows — you just let Alexandria Cortez show up to my house and try to take my cows away.”

The crowd loved it.