" /> Ronald Reagan racist? Ocasio-Cortez didn’t say that — but the controversy

Ronald Reagan, racist? Ocasio-Cortez didn’t say that — but the controversy reveals a lot about how Americans discuss race

Ronald Reagan racist? Ocasio-Cortez didn’t say that — but the controversy reveals a lot about how Americans discuss race

Over the weekend, Rep. Alexandria Ocasio-Cortez, D-N.Y., the Democratic Socialist and Fox News boogeywoman, sparked yet another conservative conniption when she took the stage at the South by Southwest festival in Austin, Texas and said the words “Reagan” and “racist” in the same paragraph.

She brought up one of Reagan’s favorite anecdotes from his 1976 presidential primary campaign (he lost to Gerald Ford that year) about a Chicago woman who was accused of fraudulently collecting public benefits under a variety of names. The newspapers called her the “welfare queen.”

“So you think about this image, ‘welfare queens,’” Ocasio-Cortez continued, “and what [Reagan] was really trying to talk about… He’s painting this really resentful vision of essentially black women who were doing nothing, [who] were sucks on our country, right? … That’s not explicit racism, but it’s still rooted in racist caricature. It gives people a logical — a ‘logical’ — reason to say, ‘Oh, yeah, no. Toss out the whole safety net.'”

The response among Republicans was fast and furious, with dozens of commentators rushing to Twitter to defend Reagan, whom Republicans have sainted in the years since he left office. 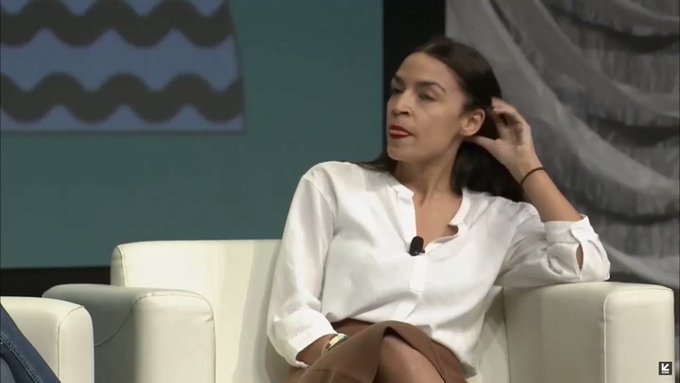 1,522 people are talking about this

Watch @AOC accuse President Ronald Reagan of utilizing racism to “screw over all working-class Americans.” (Oh, so THAT explains how Reagan carried 49 states in ’84. Black unemployment fell faster than did white unemployment. Black businesses grew faster than white owned ones.)

3,801 people are talking about this

“AOC says Reagan was a racist,” fumed Newsmax columnist James Hirsen, summing up the Republican rebuttal. “WTH is her definition of racist?”

So far, so predictable. But before the latest episode in America’s ongoing AOC melodrama concludes, it’s worth pausing to consider what it says about a larger problem in our politics. More than anything else — an example of how an emboldened Ocasio-Cortez is willing to criticize a Republican hero whose legacy even Barack Obama was reluctant to challenge; a case study in how conservative media outlets are gleefully demonizing the freshman congresswoman in order to drive traffic — the Reagan flap reveals how the left and the right talk about race today, and why they always seem to be talking past each other. Read more

Read also: U.S. participation in this war has not been authorized by Congress

Ronald Reagan racist? Ocasio-Cortez didn’t say that — but the controversy reveals a lot about how Americans discuss race